What if  FIFA decided to run a second competition featuring the second best 32 teams in the world? Who would compete in it? What would the groups look like? Based on the qualification for the 2014 World Cup I’ve set out who the best 32 sides who didn’t qualify for the World Cup would be. What follows is an outline for an international football tournament for the 33rd to 64th best international sides on the planet.

The top eight FIFA ranked sides who did not qualify for the World Cup in Brazil are:

Based on keeping a good geographical spread in each group

A tournament that will have fans interested from start to finish and staying up until 4am to watch Burkina Faso versus Uzbekistan or a pointless exercise? You decide.

Posted by Steven on July 15, 2014 in International

Despite many English football fans claiming to be disgruntled with their national side, they are the best supported side in Europe. Although England didn’t always fill Wembley Stadium during qualification for the World Cup, they normally got pretty close and come out top of the attendances ladder for Brazil 2014 qualification.

Looking at the attendances by group shows that France & Spain’s group came out on top. This is almost certainly due to the lack of a micro-state minnow such as Andorra or San Marino in their group.

Posted by Steven on October 31, 2013 in International, Statistics

In 1990 Cameroon were rightly lauded for their swashbuckling run to the quarter-finals of the FIFA World Cup. Their flair, power and pace impressed and surprised in equal measure. Many regard Cameroon’s excellent World Cup in Italy as the breakthrough moment for African football. However, that doesn’t tell the whole story as in the late 1970s Tunisia, one of the best teams in Africa, played some wonderful football in Argentina’s 78 World Cup. Their short pass and move game may have been world’s away from the powerful game Cameroon adopted twelve years later but it was almost as effective.

Thirteen years before Italia 90, Tunisia were preparing for their final World Cup qualifying match against north African rivals Egypt. After picking up four points from their games against Nigeria and losing away in Cairo, Tunisia knew that only a win in Tunis would be enough to seal their place in the World Cup Finals as sole African representative. And win they did, in style, defeating the Egyptians 4-1 in front of a partizan crowd. Those who feel atmosphere at football is calmed negatively by an Athletics track should take a look at the celebrations following Tunisia’s 3rd that effectively qualified the nation for their first ever World Cup Finals. The track merely gave players a place to celebrate and for cameramen to frolic in.

Tunisia in 1978 were only the fourth African side to play in a World Cup Finals – after Egypt (1930), Morocco (1970) and Zaire (1974). None of these sides had performed particularly well in their outings, the only bright spot a Moroccan draw with Bulgaria in Mexico 1970. The Carthage Eagles would record a couple of firsts for Africa in this tournament. They were the first country to be managed by an African at a World Cup (Abdelmajid Chetali) and they also became the first African nation to win a game at a World Cup Finals when they came from behind to beat Mexico by three goals to one.

Despite winning their first match the Tunisians were always going to find qualification to the next stage tough as they found themselves not only up against current world champions West Germany but also Poland who had finished third in the previous World Cup. Tunisia’s second game was against a Polish side including Lato and Boniek and as expected they lost, but only narrowly by a solitary Grzegorz Lato goal to nil. There was certainly no shame in this defeat, as the mighty Brazil had lost in the World Cup ;74 third placed match by the same scoreline (to the same goalscorer). However, the Tunisians will always wonder what could have been. Late in the game they almost scored what would have become an all time classic World Cup goal. Unfortunately the ball hit the underside of the bar and bounced the wrong side of the line.

The unfortunate Tunisians came up against the current World Cup holders West Germany in their final group game and gave a good account of themselves. A sterling 0-0 draw with goalkeeper Mokhtar Naili making some fine saves wearing what appear to be brown leather gloves. The scoreless draw wasn’t enough for Tunisia to progress to the next stage but it was enough for the Tunisians to cement their place in African football history. West Germany and Poland qualified in first and second place.

The 1978 World Cup goes down as Tunisia’s best World Cup performance to date. Inspired by 1977 Africa Footballer of the Year Tarak Dhiab the side almost managed to shock the world by sneaking through the group stages. Dhiab played over one hundred times for Tunisia and played his last international in 1990 as a 36 year old, captaining his country against England  who were warming up for Italia 90. Just like West Germany twelve years before, England didn’t heed the African warning and were almost undone in the quarter finals by the Indomitable Lions. Despite often playing in differing styles the threat from north Africa remains just as strong as from the sub-Saharans.

Posted by Steven on November 21, 2012 in Africa, International

Most countries have now played four games in their World Cup qualification groups so I thought it would be a good time to take a look at which countries are fielding the youngest and oldest teams so far in the competition.

In the four games that have taken place so far it’s Belgium that has fielded the youngest set of players with an average of just over 24 years old. The golden generation of young-guns like Lukaku, Hazard, Courtois, De Bruyne and Benteke helping to push the average age down. It’s the Maltese who have fielded on average the oldest players so far during qualification with an average age of almost 29 years old. 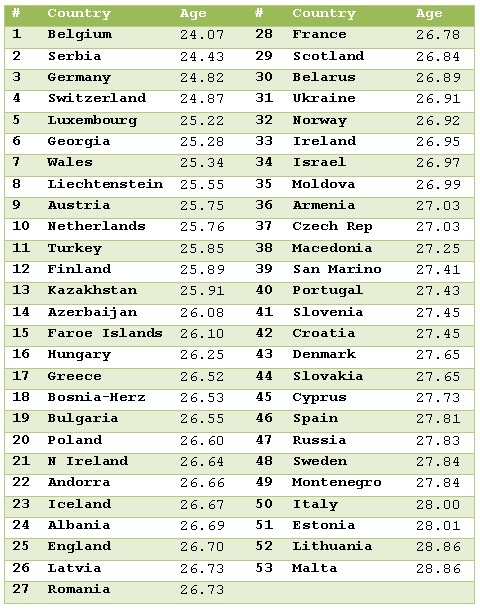 Some interesting values to note in the above table are the World and European Champions Spain are an ageing squad, on average almost four years older than the youthful Belgians.

Posted by Steven on October 21, 2012 in European, Featured, International

Much is made of the global appeal of football, with FIFA justifiably proud that there are more members of its organisation than there are of the UN: over 200 countries enter the World Cup competition.

What’s perhaps not quite as well known is that many of these nations who enter quickly exit the competition and it’s not surprising that many of these countries are Caribbean islands or micro-states. However it’s not only obscure countries that exit early. Of the thirteen most highly populated countries in the world seven had been knocked out of the 2014 World Cup before 2012 had even begun. China (1), India (2), Indonesia (4), Pakistan (6), Bangladesh (9), Philippines (12) and Vietnam (13) have seen their World Cup dreams shattered even before European qualifying for the tournament had begun.

As we head into 2012 it’s interesting to see that of the approx 6.8bn people who live in the planet only 3.2bn are represented by countries still in the 2014 World Cup with United States the most highly populated country on the planet still competing for a place in the finals. San Marino are the smallest country who have not yet been knocked out of the 2014 World Cup. The Sammarinese  begin their qualification campaign at home to Montenegro in September.

Posted by Steven on January 3, 2012 in International