“It is without question that first-class football by floodlight is both spectacular and enthralling. With vision fixed to the pitch that alone is illuminated, there can be no distraction at all to disturb or frustrate attention. There is an accentuated feeling of expectation and excitement, and the speed of the players and of the game itself is, or seems to be, increased. The flash of bright-coloured jerseys against the bright green of the grass combine in one “vistavision” panorama, but with the added reality of live people seen in the flesh.”

Floodlit football is something we’ve all grown accustomed to in the modern era. But there was a time in the dim and distant past where floodlit games were frowned upon and even discouraged by the establishment. Remarkably it was as late as 1950 that the Football Association of England allowed floodlit games to take place, and that was only with prior arrangement. English football was a late adopter of floodlights, with countries in South America and on the continent introducing them far earlier. This is perhaps unsurprising when you consider the heat of the day in South America.

Despite official introduction being twenty years away it didn’t stop the London clubs experimenting with lights. In the early 1930s, London clubs Spurs, Arsenal, West Ham and Chelsea joined together to play a match against a representative side at White City Stadium (a ground that would later host France against Uruguay in the group stages of the ’66 World Cup). Not only was the match floodlit, but also played with a (then unfamiliar) white ball that was washed every time it left the field of play in order that its luminescence was maintained throughout. In a few floodlit experiments in the late 19th Century teams had even gone as far as painting the ball with whitewash in order to improve its visibility and following the ball around the pitch from one large spotlight placed on the halfway line.

Despite the seeming reticence on the part of the authorities, games under lights became necessary for many clubs as the financial realities of professional football hit. Stadiums that could only be used on a Saturday but had to lie dormant throughout the week didn’t make sound business sense. Indeed, the inability to fit in fixtures during the working week led to league fixtures having to be scheduled on Christmas Day as well as the now traditional Boxing Day. Despite these limitations on playing official fixtures under lights, many clubs were playing games against touring European sides during the week in order to entertain fans and to boost coffers. However, the need for further competitions and matches to supplement the league schedule was strong.

Suggestions such as the creation of an Anglo-Scottish-Floodlit-Cup were proposed. After all, many of the big clubs in England were regularly playing test matches against Scottish opposition already, and codifying these these friendlies into an organised competition seemed like a sensible idea. Incidentally, this is very similar to how UEFA are currently treating their League of Nations idea to replace international friendlies. Despite these possibilities being fielded they never got past the drawing board stage.

Eventually under pressure from club sides the FA acquiesced, and in the early 50s FA Cup replays began to be played during the week, and following on from this league fixtures were finally permitted to be played under lights in the mid 1950s. The rest is history.

I’ll leave you with a quote from the previously mentioned Caxton’s Encyclopedia of British Football and Association Football on the future of floodlit football from former Tottenham Hotspur manager Arthur Rowe:

“If we let our imagination run riot a little if we can, of course, be terrifically enthusiastic about the potential of a Grand European Floodlit League with all matches played in mid-week, Without doubt some great matches would be certain.”

I must admit, I find the name Grand European Floodlit League far more palatable than European Champions League. It certainly describes the league more accurately, and in my view more romantically.

For a more rounded explanation on the history of football floodlights I’d recommend spending some time on footysphere’s marvellous site. You can also view hundreds of pictures of floodlights at this lovely tumblr site Floodlight Fancy.

A couple of years ago I wrote a very short blogpost with a picture of Aston Villa’s floodlights from the 70s/early 80s. They really are a wonderful sight.

Yesterday a comment was left on that post that I feel requires greater exposure, here it is, in full: 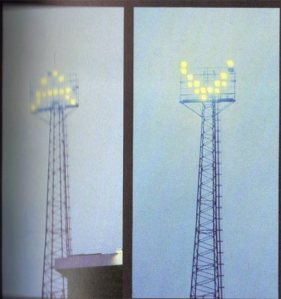 A sight to behold

Hi, thanks for posting the Villa lights. I grew up watching them out of my mums bedroom window. When they were on you could see a cool blue glow across the city of birmingham in the shape of ‘A’ ‘V’. They were amazing! Was a real visual effect that could be seen for miles and you knew whose ground it was too!

To give you some history… they were first changed from the normal square bulb shape to the famous A,V in 1971 ready for a cup semi final at villa park for the TV cameras. They featured new brighter bulbs that worked well on television that were sent over from abroad and only just made it in time for the televised game!

Everyone loved them as you can imagine and it was a very sad day when, in the late 1980′s and early 1990′s they were replaced by roof top lights. As you will agree… nowhere near as nice to look at.

I’ve loved football floodlights all my life. They are like huge robots with bright eyes and show everyone where the ground is when you travel through the various towns.

Shame they are being taken down at most grounds now or they have those silly, less maintence needed, poles.