A few weeks ago the transfer window slammed shut. This was the biggest thing that had ever happened. Jim White’s Scottish head almost exploded in your telly.

Twitter was abuzz with rumour and counter-rumour regarding the human resource situation at football clubs up and down the country. I thought I’d fan these rumour flames by putting to good use my (albeit minimal) experience of creating automated twitter accounts to good (or nefarious dependent on your point of view) use. I created a twitter account that would automatically generate transfer rumours. It was called footballnews001.

I wrote a simple application that contained a few simple phrases such as “SPOTTED:  Player seen in Place with Manager discussing a possible transfer.”  The Player, Place and Manager are then replaced by random selections from a list of players, places and managers before the text is tweeted. The principle behind it wasn’t too dissimilar from an “origami fortune teller” that I’m sure many of us remember making during our childhood. 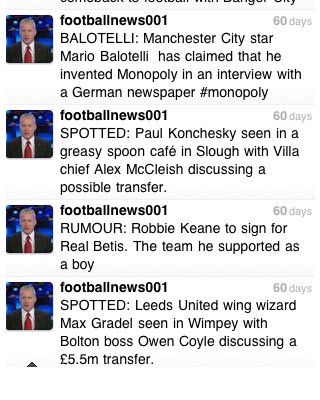 I set the twitter feed going and the reaction was quite interesting. I think it can be separated into four distinct groups.

Group 1: Those who thought it was shit: Fair enough, it was a bit silly and at times I felt I was adding to the nonsensical malaise of transfer rumour rather than mocking them. However, I did use this same twitter account to tweet every line from the complete works of Shakespeare with the word “love” replaced with “Peter Ndlovu” so it could have been worse. Much, much worse. Believe me.

Group 2: A group of people who quite liked it and re-tweeted the funnier ones. This group also includes those who liked to refute transfer rumours about Fabregas to Swansea City by pointing out that there aren’t any Miss Millies east of Cardiff, so the rumour simply couldn’t be true. On a sillier note I have to say that it was nice to see Doncaster Rovers midfielder John Oster re-tweet a rumour about being spotted in a Little Chef on the M63 with Arsene Wenger. It’s pleasing to see that footballers do sometimes have a sense of humour, even if it is computer generated..

Group 3: Those who thought that because a tweet began “Sky Sources” that it had some sort of credibility. It didn’t. We should all check our sources before re-tweeting in order to stop ourselves looking like mugs. (Though I have to admit that I did feel guilty on occasion)

Group 4: The final group. The disturbed group. The group who were riled so much that they felt the need to send abuse to the account for suggesting Samir Nasri was on the verge of a move to Charlton Athletic. Now, I understand (to a degree) the vitriol heaped on players like Nasri when they actually do leave, but I’m amazed at the amount of abuse you can get on twitter for merely suggesting that something might possibly happen.

We are living in scary times.