“The best game I’ve ever played” is a remarkable endorsement for any man to make. But when the man making the claim is Alan Ball four years after lifting the Jules Rimet World Cup trophy with England you start to sit up and take notice. The game Ball  is promoting is Soccerama, a board game released in the early 1970s. I was lucky enough to pick one up for a few quid at my local charity shop.

The box screams a myriad of game-play options to the unsuspecting gamer; Four Divisions! Promotion! Relegation! Transfer Deals! Thankfully for the avid board-gamer this game was released before agents were commonplace in football. Therefore Soccerama doesn’t suffer from the same difficulties as recent Football manager computer games. It’s Alan Ball’s smiling grin that adorns the box (the caption proudly displaying the words: EVERTON & ENGLAND) and the claim “The family football game with a difference” – though the difference isn’t particularly clear at any point whilst playing the game. 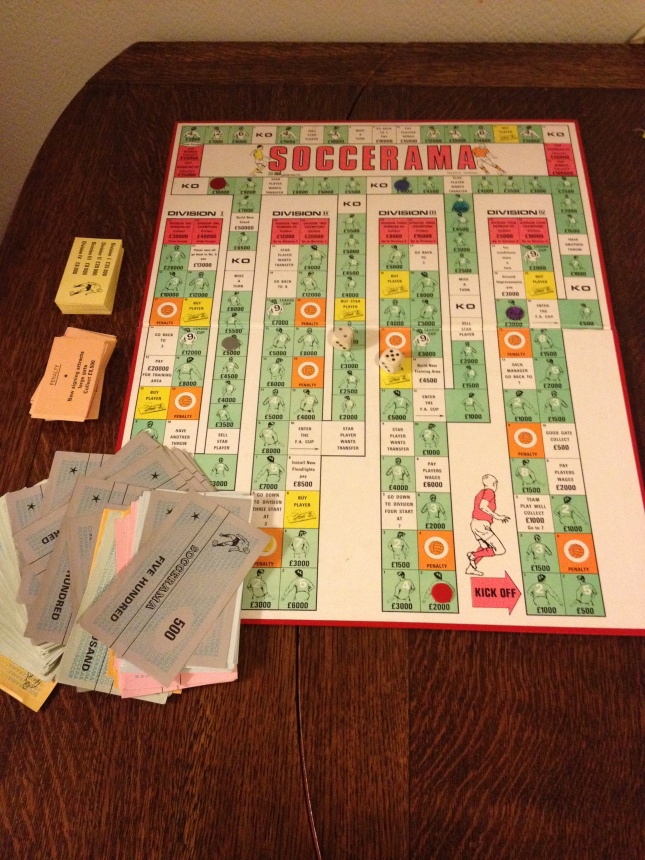 Soccerama – The best game Alan Ball has ever played

Despite being released in the early 1970s in an era of football that was supposedly pure as the driven snow (or Alan Ball’s boots?), the game is centred around the accumulation of wealth. Like Monopoly, each player is given a wad of fake paper cash to spend, but rather than constructing an empire of green houses and red hotels the gamer accumulates star player cards in order to reign victorious. These star players helps the player to propel themselves up the leagues from lowly Division Four to the epoch of the pyramid, The First Division Championship, FA Cup and European competition. 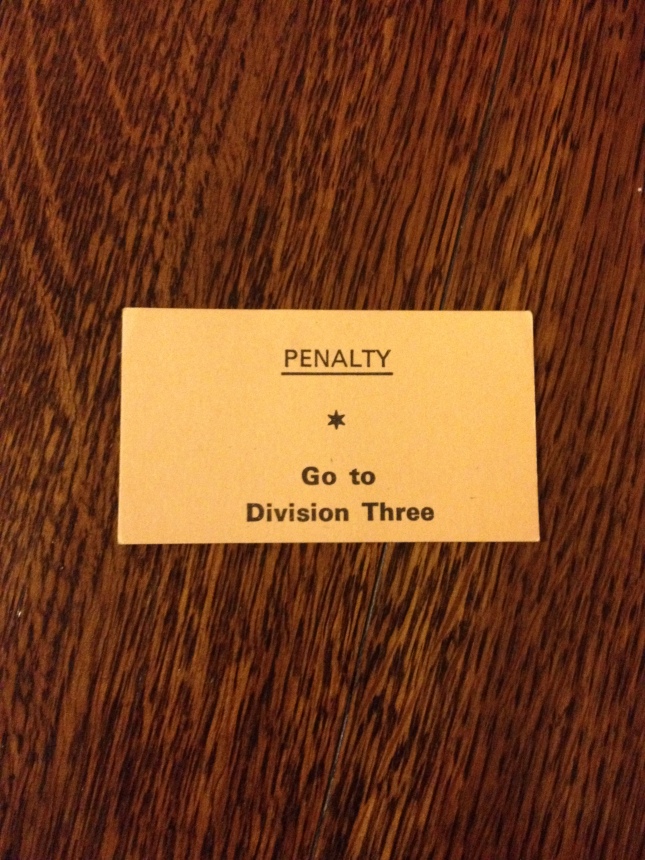 Go directly to division three, do not pass go, do not collect parachute payments. This is 1971.

What dates the game more than anything is the seamless move throughout the divisions. The prize money for winning the First Division isn’t a great deal larger than the prize for the other divisions. Perhaps more tellingly the winner of the Cup competitions is awarded a full £10,000 more than the winner of the First Division. This game was produced when the FA Cup really meant something.

If the casual gamer gets bored of the rather outdated ideas in Soccerama (after all if a football game was produced today it’s unlikely a set of £500 notes would be in the box) I could suggest the addition of an “EPPP card”. This EPPP card would allow the player to purchase “star players” from opponents who are in  lower divisions for a fraction of the price they are actually worth. Also players can award themselves £40m for winning the First Division rather than £40,000. It may be more realistic, but I bet Alan Ball wouldn’t think it was the best game he’s ever played.

This game is endorsed by Emlyn Hughes, a man who was one of the first players to forge a career outside of football, chiefly as team captain on Question of Sport opposite England rugby legend Bill Beaumont. He was also one of the first footballers to give their name to a very popular video game, in his case: Emlyn Hughes International Soccer: http://www.ehis64.net/. Less famously he was also the face for the board game: Emlyn Hughes TeamTactix.

The face that launched a thousand board games.

I picked this game up from the same Oxfam shop in Bracknell that I found “Football League” that I reviewed previously. However, this one came at a bargain 99p – eight times cheaper than its non-footballer endorsed counterpart. I can only assume that doddery Dora was a little dismissive when she priced up this marvellous piece of football history. The aim of the game isn’t to win football matches, or even to climb up the league ladders, instead it’s to assemble the most expensive/best squad available. If the game were made today it would almost certainly be endorsed by wheeler-dealing football manager Harry Redknapp. 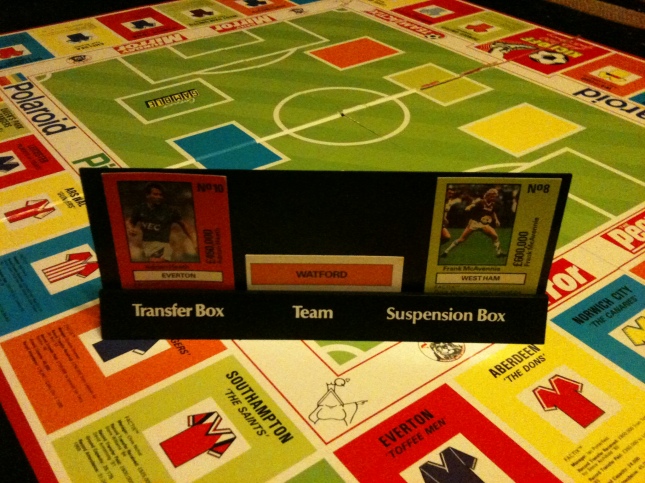 Amaze your friends and confound your enemies by pretending to be Graham Taylor.

The game features twenty five British football clubs. The best twenty-one in England (including Southampton, Watford and Norwich City) as well as the top four Scottish clubs. The game includes hundreds of football cards depicting the players from these clubs, you collect these cards as you travel around the board. The cards are probably the best thing about the game, the description of Pat Nevin “a right winger with left wing ideals” and Wayne Fereday “could have picked up Bronze had he competed in the 1980 Olympics” being my favourites. 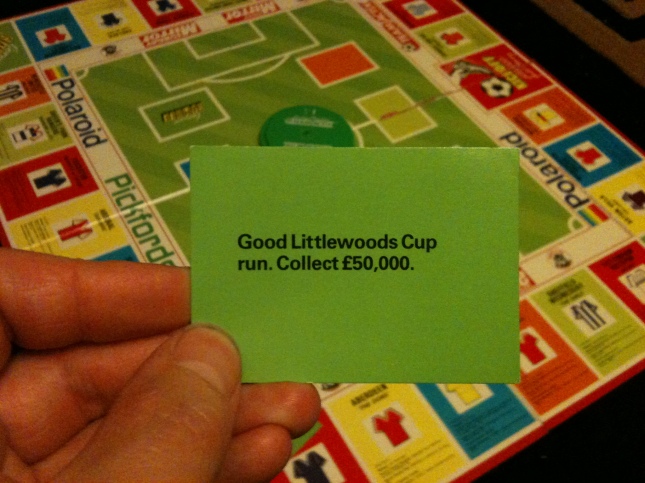 The game’s equivalent of third place in a beauty contest.

It’s very difficult to not adore a game that has a card that involves the Littlewoods Cup, however the game rules are very strict indeed, insisting that each game lasts a marathon (for a board game) hour and a half:

The object of the game is to compile a full team (1-11) of top class players within 90 minutes of playing time.

It’s an obvious attempt to mirror the length of a football game, although assembling a team of 11 within 90 minutes is the sort of thing Barry Fry did at Barnet in the early 90s.  If that restriction wasn’t bad enough the following rule should surely strike  fear into anyone thinking of playing the game:

“Time out” periods do not exceed two minutes and are added to the playing time.

I can’t see any real reason for breaks not to last longer than two minutes, kids have to go and have their tea at some point don’t they? I guess these days there’s an EU directive that insists on breaks of fifteen minutes during board games like TeamTactix. It’s probably at this point I should mention that throughout all the paraphernalia of the board game the word TeamTactix is marked with the two letters TM, lest any other mischievous manufacturers attempt to steal the idea. Ian St. John TeamTactix anyone?

Hottest thing to come out of the Channel Islands since Bergerac.

It’s a truly fantastic game for anyone who is between the ages of about 30-40, wheeling and dealing players they remember so well from their youth. The cards I’ve shown in this small review are only a fraction of what’s included in the game – card after card depicting Sheffield Wednesday, Norwich and Abderdeen players with small snippets (or FACTIX – TM) such as “refuses to learn to drive” – John McClelland (Watford) or  “enjoys greyhound racing” – Glenn Roeder (Newcastle United) – it’s quite beautiful and should take pride of place in anyone’s 80s footballing reliquary.

Posted by Steven on September 1, 2010 in Board Games

In what is likely to be a short series Mirko Bolesan brings you a review of a football related board game. We start with “League Championship”, a shrewd purchase in the local Oxfam shop at a bargain £7.99. 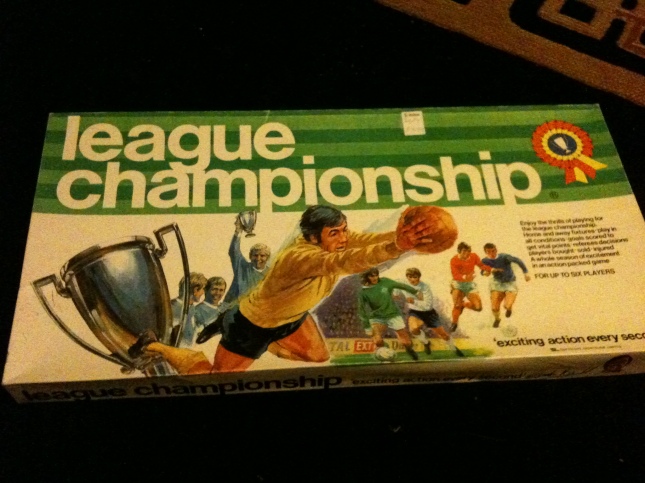 World Cup winning goalkeeper Gordon Banks adorns the cover of the box and it’s his endorsement that covers all four edges of the box. Gordon Banks certainly promoted rather more wholesome products than his World Cup counterpart Pele.

Gordon wouldn’t lie, would he?

The game features a circular board similar to family favourite Trivial Pursuit, and features line after line of numbers one set featuring the number of points each player has, the other the number of matches each player has played. It looks complicated – and probably is – I haven’t convinced the wife to play a game as yet. 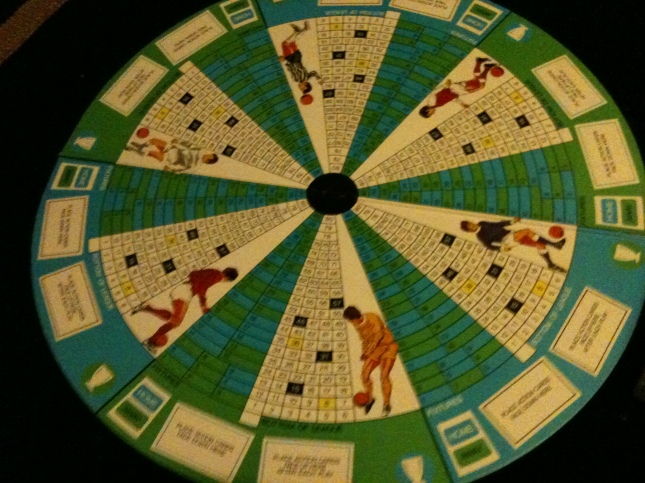 The similarities between this board and the Round Table at Winchester Castle are astounding.

Like any self-respecting board game a set of figurines are included to move the player on the board. It has to be said that the pieces are relatively disappointing. They are all white. Either it’s a tribute to Peter Shilton’s all white goalkeeping kit from the late 70s or the creators of the game expected you to paint them yourselves at home. The thing is, any self-respecting child of that era is unlikely to have paints that come in the royal blue of Everton or the claret of Aston Villa. Instead they are only going to possess leftover Humbrol paints such as the Sea Grey of a chinook or a khaki green of a Messerschmitt Bf 108, leading to some quite odd kit combinations unlikely to have been used in reality until at least the early 90s (most probably on a groundbreaking Bolton Wanderers away kit).

The game also comes with a set of cards that are similar to those of the “Chance” set in Monopoly, although these are obviously football related and do not include Beauty Contests or Bank Errors in your favour. My favourites include “Go away for special training. Add 2 goals to your score” and “Recent Cup commitments in Europe weaken team. Lose one goal in this match” showing that managers in the 1970s also had these sorts of squad rotation problems with regards to burgeoning European competition

I am unsure as to whether there is a “Work out the corner kick after they’ve used it against you once” card or not.

The crowning glory of the game is the League Championship trophy that is included. You are instructed in the rules of the game that the cup must be placed in the centre of the board on the plinth* provided. * – black bit of plastic. It all sounds very grand, but it’s not easy balancing the cup on the crease of the board. It should be added here that the cup isn’t actually as good as the one you get in Subbuteo, it’s clearly lower grade plastic and not as big, however it’s very nice to actually play for something. 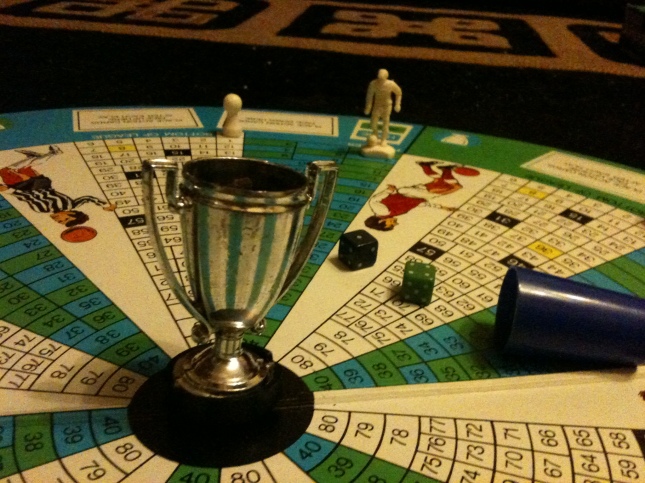 I had to wait for my wife to go to bed before setting this out on the living room floor.

It may sound rather sad, but I think the best moment of the game is reserved for putting it away. The back of the box is beautiful, you realise just why it’s a circular board.

Overall it’s a deeply unimpressive game, based more on luck than on judgement. Random throws of the dice and the drawing of particular cards appear to be what defines the winner or loser. Very much like football you might say (if you were an idiot).