In the late 1970s a company called Marshall Cavendish released a series of football magazines which the avid reader would slip into binders to create their very own football encyclopaedia. One of the articles contained within is a lament about the struggles of the British game and part of the argument for improvements made by the author suggests the introduction of a British Super-League.

The author has chosen an interesting selection of sides, many of which would be unlikely to feature should the list be drawn up today. He uses criteria such as recent attendances as well as success to decide whether clubs should be admitted to such a league. 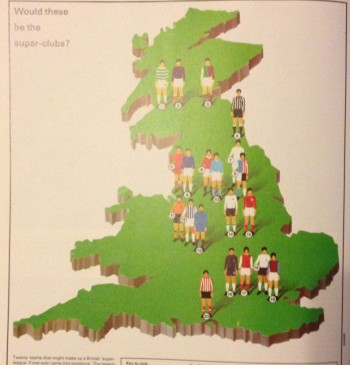 Would these be the super-clubs?

The proposed British super-league contains a few oddities. The first being that the two Edinburgh and Sheffield clubs are expected to merge (and are even wearing half-and-half kits to denote that). Other interesting aspects of the proposal are that teams like Coventry City and Derby County are included amongst the elite.